An investor in Gnosis, one of the original DeFi protocols, calls on the project to pay back investors 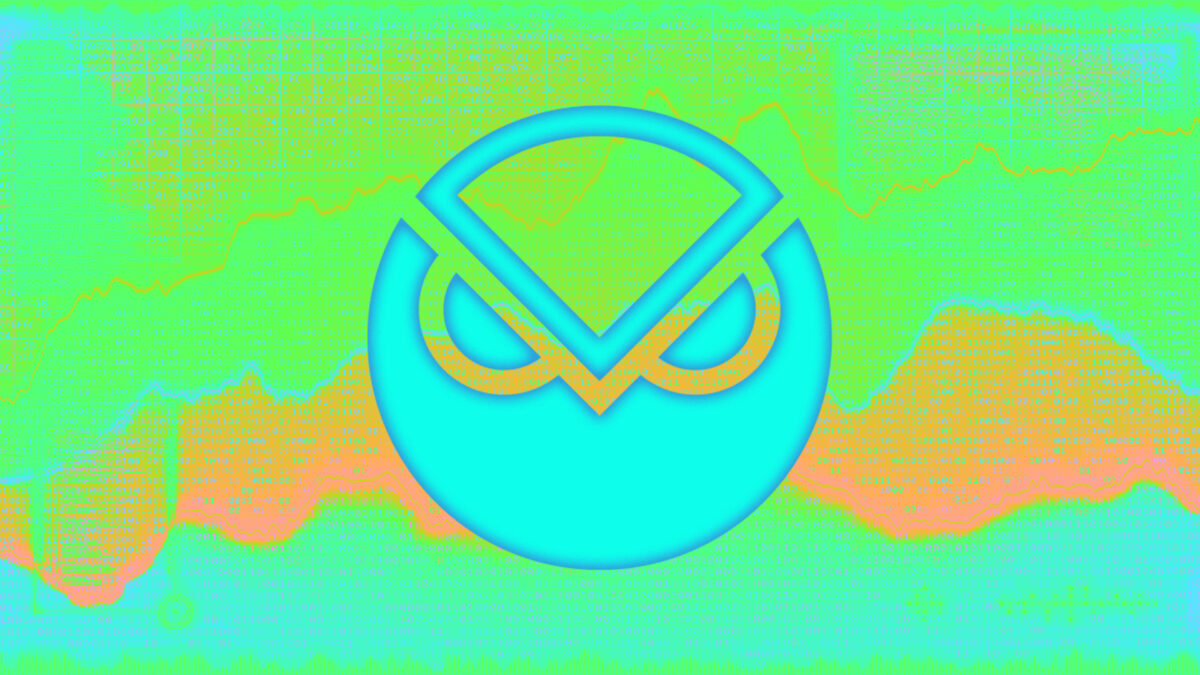 Cryptocurrency investment company Arca is calling on Gnosis — one of the original DeFi protocols — to overhaul its operations amid what Arca sees as a failure to deliver value to token holders.

Gnosis is best known for its prediction market platform and its rapid-fire $12.5 million ICO in 2017. But it also developed an early decentralized exchange, with the rationale that a decentralized predictions market would run more effectively on top of a DEX. In July of 2020, it launched an upgraded version, called Gnosis Protocol.

Now Arca, which in 2017 invested in Gnosis's tokens, called GNO, says the team needs to go back to the drawing board — starting by returning some its investors' money.

The pushback is unique in the crypto market. In traditional markets, it's not unusual for large investors and hedge funds to offer feedback to management and suggest operational changes to deliver better results for shareholders.

In a deck shared with The Block, Arca argues that not only have the project's products have failed to gain traction, but the Gnosis team has also diverted from the promises of its original white paper and irresponsibly managed its finances. It calls on the project to issue a tender offer for GNO and effectively return cash to investors who want an exit.

"To date, Gnosis has made a number of contributions to the Ethereum ecosystem with its products and research and we want to support these endeavours going forward. However, the GNO token is not utilized in any value accreting way in the suite of Gnosis products. It also trades at a significant discount to book value. Gnosis now has the opportunity to reinvigorate its community and work towards building financially sustainable products with active user bases, while returning value to GNO token holders."

It appears that Arca is not convinced that the prediction market business is even viable, given the muted response to such venues so far. Gnosis's rival Augur has struggled to attract more than a few hundred daily active users. Meanwhile, Omen has seen volumes grow to just over $1 million with average daily volumes sitting at just $13,737.

Besides that, the hedge fund believes that Gnosis has "strayed from their initial promises and disappointed their community with the products it has delivered to date." For instance, in its original white paper, the team did not mention that building a decentralized exchange would be a primary focus.

According to Arca's deck, the first mention of the plan appeared in a revision to the white paper in December 2017 — months after the ICO. At that point it was only mentioned in the following passage:

"GNODEX will be the decentralized, scalable state channel-based exchange to trade predictive assets. The development already started, however, due to its complexity it is expected that an MVP will take at least a year of development. Gnosis seeks to combine forces with other teams to build the basic layers required to offer a decentralized exchange, with Gnosis adding layers required to offer trading of prediction market outcomes."

After its first exchange, DutchX, failed to gain adoption, Gnosis developed another one called dFusion protocol, which was rebranded to Gnosis Protocol and launched in July 2020.

DutchX is one of a number of decentralized exchange platforms — including Bancor and Airswap — that held ICOs in 2017 but failed to gain much traction.

In recent months, volumes on decentralized exchanges have begun to skyrocket, but most of that growth has been driven by newer market venues like Uniswap and Balancer.

Arca's deck outlines a number of recommendations for Gnosis. First, the hedge fund proposes that the company execute a tender offer for circulating GNO, the token that powers its protocol. "This would allow Gnosis to run as a lean startup, rework the token's use cases and redistribute the remaining tokens in order to create network effects on existing products."

Effectively, the project would buy back tokens from holders. The plan would leave the firm with enough runway to operate for at least another year. For investors who decide not to tender, Arca outlines a plan to reward them with more GNO tokens via 10 to 1 split. Arca's argument essentially that Gnosis hasn't delivered and should give investors the opportunity to cash out.

Analysis of the firm's financials shows that it is trading well below the book value of its treasury. 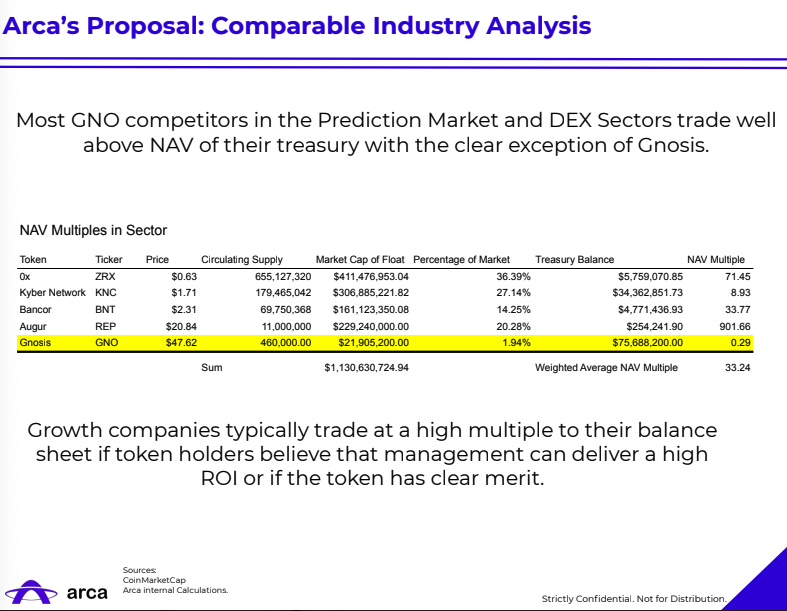 With $75 million in reserves (including both cash and ether), the firm has far more runaway (approx. 8 years) than the average high-growth startup (~1 to 2 years). A breakdown of its 2019 expenses shows nearly $2 million in overhead was used for "other operation overhead," including its participation in other token investments like IDEX 2.0 and Zerion.

"Unlike its other business activities, Gnosis has not reported these investments publicly nor shared their reasons for investing, as is typical with VC investments," reads the Arca deck.

The Gnosis team has acknowledged its sliding token price, recently launching a pseudo token buyback by converting rewards from its yield farming efforts to GNO.

Nonetheless, trading with investor money that was intended to build out new products seems to reflect the same pattern of behavior that Arca is now criticizing.

In a statement to The Block, Gnosis co-founder Martin Köppelmann said the project was working on some changes following conversations with Arca.

"We were presented with a proposal by Arca in early June, which was also discussed with Gnosis stakeholders then," he said. "However, we had already been working on an alternative path for the GNO token, which we think is much more appealing. Our own proposal includes a Gnosis DAO and gives much more ownership to GNO holders. It will be presented to the community very soon."

Arca's full presentation can be found below: