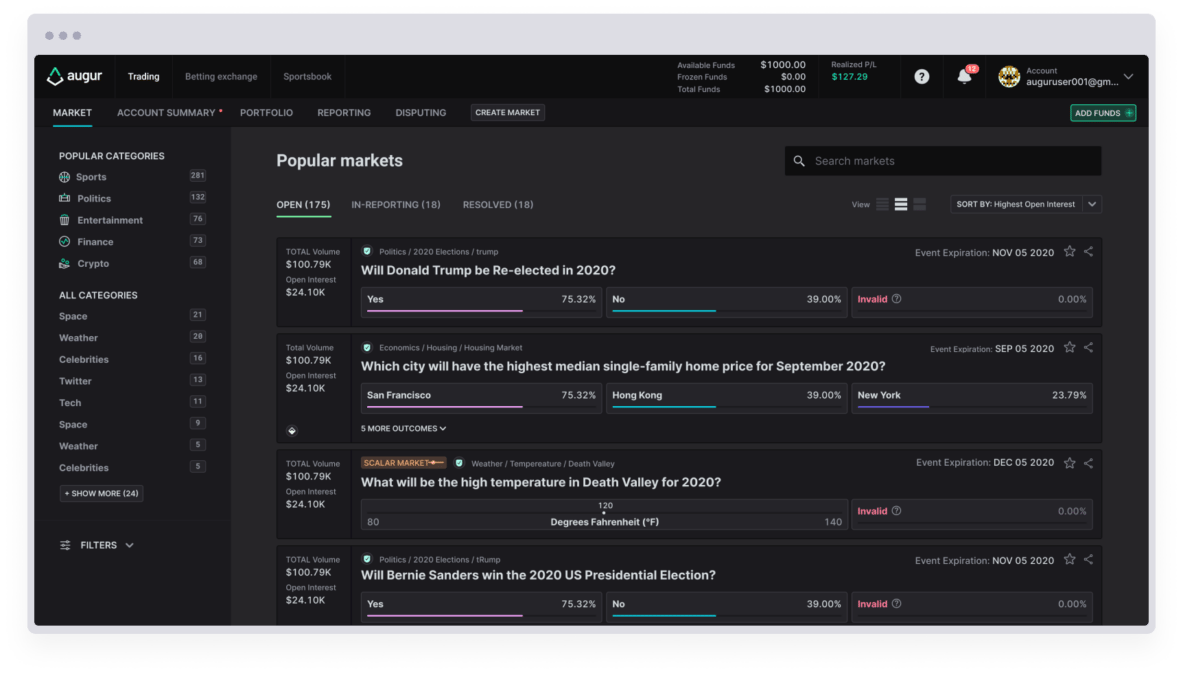 Decentralized prediction market platform Augur has launched its "Augur v2" platform upgrade. The new version consists of a range of features designed to improve its user interface and make trading faster and cheaper.

Perhaps the most important change is that in Augur v2, bets will be "effectively in dollars," according to a blog post announcing the launch. In the original version, Augur's markets were denominated in ETH, leaving users exposed to its volatility relative to the U.S. dollar. The new version lets users trade in DAI stablecoin.

"With DAI being pegged to the dollar and if it stays stable, when people make the bet, the payout that they get at the end is what they expected to get. So, that's kind of the biggest change in Augur v2," Peter Vecchiarelli, Augur's operations lead, told The Block.

Augur v2 also promises to be faster and cheaper. Vecchiarelli emphasized a new integration with decentralized exchange protocol 0x, which he says will cut down on trading fees.

Additionally, users can now run Augur in the browser, whereas prior they had to install a desktop app before running the link in the previous version. That makes the user experience more like other things people are used to, said Vecchiarelli. "We also redesigned the user interface from the ground up. It's more akin to what you'll see on Binance or Coinbase Pro."

New mechanisms have also been put in place to prevent "invalid and deliberately confusing markets" from surfacing.

Specifically, the new version aims to prevent scammers from taking advantage of "invalid" bets — for instance, when bets don't have clear expiration dates, or when descriptions of bets are either unclear or contain subtle grammatical or language mistakes that can lead to confusion over their real meaning.

The bets made during the time prior to the market being deemed invalid are distributed equally among participants. This setup created an arbitrage opportunity for scammers to game markets they knew might be deemed invalid.

As a response to this, Augur is adding a feature on their platform whereby bettors will be able to select "invalid" as a potential outcome in their bets, allowing them to predict and account for situations where invalid bets may happen, and hedge their downside.

If several users select "invalid" as an outcome, they are in effect flagging the fact that such a bet will likely end up being invalidated, also providing an indirect signal to other users to be cautious in such cases.