What’s in a milestone? On Blockstack's 1 million 'verified users' and the quest for adoption 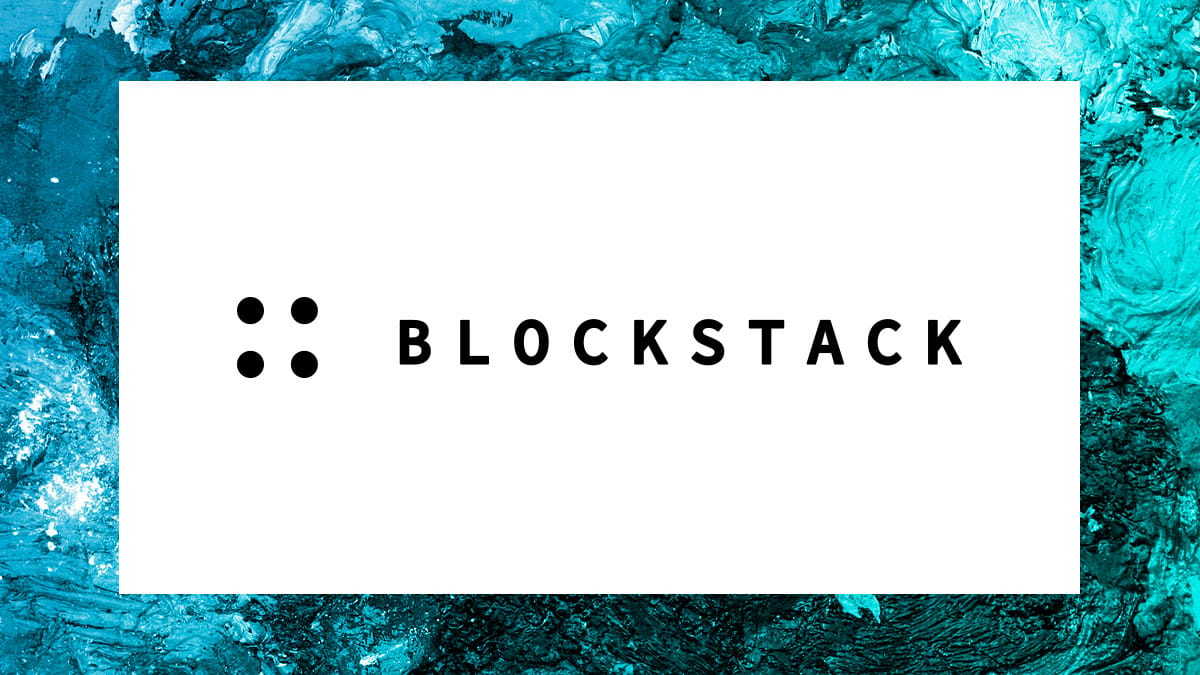 January 29th saw Blockstack – the crypto industry startup that seeks to build a decentralized, user-centric Web – make a big announcement: that it had registered 1 million “verified users.” In doing so, the startup unlocked some $6.8 million that it previously raised from investors.

“This self-imposed requirement was our way to introduce investor protection and signal that we’re building for the long-term in a disciplined manner. The decision as to whether a Milestone is met is determined by an independent Advisory Board,” the company wrote. “On January 16th, that Advisory Board unanimously determined that Milestone 2 had been achieved, and on January 29th, we filed a Form 1-U with the SEC disclosing the achievement.”

It was an announcement that drew big plaudits in some quarters; as Messari noted in its write-up of the announcement, the event presented “a notable milestone for any network, especially as numerous projects flood the market with new offerings and compete to win attention among an already thin user base.”

But the announcement drew scrutiny as well (including, full disclosure, from my colleagues here at The Block), primarily centered around the question of whether those one million verified users represent actual human beings – and how, exactly, Blockstack reached such a conclusion.

I reached out to Blockstack in an effort to learn more about the process behind the milestone determination. Here’s what their representative initially sent me:

“Verification varies from app to app, and partner to partner, as they are independent. However, the Blockstack registration and authentication tool offers baked-in protection for spam registration, rate-limiting by IP, and more. Further, user acquisition campaigns by Blockstack PBC involved additional verification and/or KYC processes. For example, through Blockchain.com, only 'Gold Level' users were added, a designation that requires that they have registered an address, government ID and more. At other times we've used the built-in browser social verification via Twitter, Facebook, Github, and other networks, and used phone number verification via Twilio step (restricted to trusted carriers and countries). All available information can be found in our blog post and the 1-U filing.”

While my follow-up interview request was declined, I was sent a link to a new blog post published on January 31st that could perhaps be construed as a response to questions I posed as well as the social media-based criticism directed toward Blockstack in the wake of the news.

As CEO Muneeb Ali wrote: “There have been some questions regarding username registrations vs. active users. In this post I will shed more light on the initial network growth and measurement limitations on the network.”

For what it's worth, I believe that such questions are perfectly valid and ought to be pursued.

In the nearly six years that I’ve covered the industry, the perennial Moby-Dick hunt of the bitcoin and blockchain faithful has been the pursuit of adoption. From payment processors to custody solutions to financial products to user experiences to conferences to – well, all of it – the general thrust has been to try and figure out ways by which the technology can be put in as many hands as possible, and to keep it there. And I would hazard a guess that some of the anxieties that exist in the space today share a common wellspring: the concern that adoption is slow and that this state of affairs may persist for the foreseeable future.

What is a “verified user”, exactly? “Verified user” was defined by the advisory committee as a user account on the Blockstack network with at least one form of “acceptable attestation” indicating that the user account is owned by a human and not owned and operated by a computer program or bot. “Acceptable attestation,” defined in the sole discretion of Blockstack, is either a KYC verification process, a phone number confirmation or a social media verification.

“Per our announcement, Blockstack PBC has on-boarded over 1 million registered usernames through a mix of collaborations, partnerships, marketing efforts, app growth driven by independent developers, and more. That being said, registered usernames are not the same as daily active users, nor have they ever been presented as such,” he wrote. “Back in 2017, when we were setting up the legal definition of users in the self-imposed milestone, we precisely defined a user as a registered username on the blockchain (not active user). The milestone was intended to introduce people to the Blockstack network. We’ve achieved this goal through various channels. Blockstack PBC is not claiming to have a million active users on the Blockstack network.”

In Blockstack’s SAFT document, governing the sales that took place in 2017 (as filed with the SEC), the firm said this: “‘Verified User’ shall mean a user account on the Network with at least one form of an ‘Acceptable Attestation’ indicating that the user account is owned by a human and not owned and operated by a computer program or bot. Acceptable Attestations will be defined in the sole discretion of Token LLC and communicated to the LP Advisory Committee by January 1, 2019.”

In a separate statement from Blockstack, the team said of that definition and the process of verification:

"The self-imposed Milestone 2 was legally defined in 2017 (legal definition in the SEC form 1-U). The 2019 SEC disclosure refers to the application of those definitions. This process ultimately concluded in January 2020, upon the advisory board determining that Blockstack PBC met the milestone. Details in our blog post, along with clarification on registered usernames vs active users, can be found here: https://blog.blockstack.org/user-activity-blockstack-network/"

Ali went on to write in the January 31st blog post that “username registration serves as a proxy for broader network growth. Username registrations are also very broad and include new STX owners, traffic from various apps, partnerships, and marketing experiments.”

“We acknowledge that we’ve encountered bad actors. We’ve had to fight spam, and we’re proud of the measures we’ve taken, including IP rate limits for our registrar, social verifications, and phone verifications,” he continued.

It’s worth noting that in an SEC filing dated July 11, Blockstack offered some specifics on the number of user registrations it had received up to that point. As the startup said: “the second milestone is for 1,000,000 verified users to be registered on the Blockstack network by the end of January 2020.”

According to data, there were 156,600 total usernames by November 6, 504,000 by December 8 and 1.97 million addresses by January 29. That means that from December 8 until January 29, Blockstack supposedly added nearly 1.5 million usernames and at least 50% of them would have to be verified.

So where did the one million verified users come from? 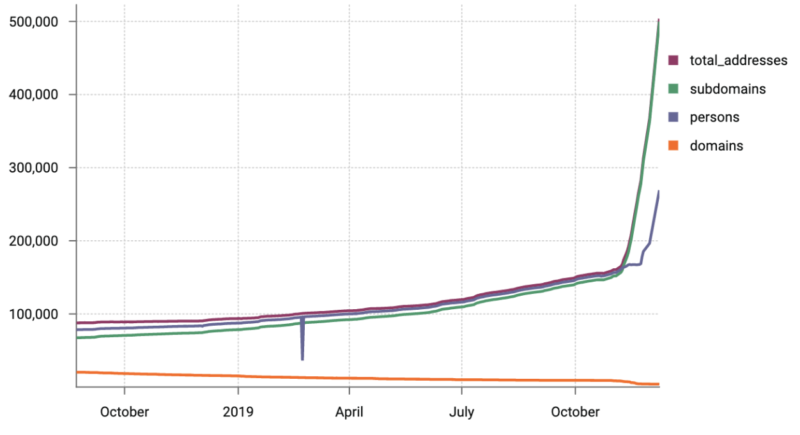 But most of the users that received the airdrop are likely already depicted in the chart above. The number of total addresses grew by 344,000 since early November, which is also around the same time when the airdrop started. Moreover, none of the STX tokens airdropped by Blockchain.com will be delivered until February 2020  –  they are all locked until then.

In a separate blog post, Blockstack disclosed that it was experimenting with airdropping STX tokens themselves and letting users verify their phone numbers through Twilio. That blog post highlighted exposure via privacy apps and messenger apps – both of which undoubtedly fit into the user profile of someone who would be attracted to a decentralized internet.

Blockstack further noted that it “engaged in various marketing campaigns to raise awareness around internet privacy and educate people about decentralized applications. Our marketing campaigns targeted at university students were especially interesting; data collected from these campaigns suggests that university students may be an interesting initial community where decentralized apps and Blockstack ID use takes off.” So, in sum, they undertook a range of efforts to identify and reach out to different kinds of users who might be drawn to the ethos and practical usage of a decentralized internet.

But all of this spurs on additional questioning. What was the exact process by which the verified-user count was determined? My efforts to learn more about it the project’s token fund advisory board were largely unsuccessful. Investor Arianna Simpson told me that “[t]he measures for meeting Milestone 2 were decided in 2017 (should be in the SEC filing), and the advisory board determined that under these pre-set guidelines, Blockstack PBC met these requirements.” But as Blockstack’s July filing indicates, “the method of measuring the number of verified registered users for purposes of the second milestone is still under consideration by an independent advisory committee formed by the AI and QP Funds, the LP Advisory Committee.”

Further – and these are, perhaps, more subjective queries – should the people who were airdropped STX tokens even be counted as verified users? Are they a “user” given that the traditional definition of that term is “one who uses”? And where did the other ~700,000 verified users come from, especially in such a short period of time?

And as Ali himself points out: “the privacy focus of our network makes it nearly impossible to measure active users, so by design, there is no way to collect activity data.” So if privacy is a major focus here, and by design it’s difficult to measure activity, why set such a goal at all? Why not set a milestone based on the number of registered users since day one?

Blockstack perhaps has an incentive to meet Milestone 2, as outlined in its Reg A+ offering circular, in which it wrote:

As Ali pointed out in the January 31 post, the milestone “had a narrowly defined legal definition tailored to the Blockstack network’s specification, and we successfully met that requirement.”

But there’s interchangeable language at play here that could allow for flexible definitions – username registrations, verified users and the like – and open the door to selective interpretation. It's that kind of semantic gamesmanship that fuels the perception that Blockstack may be spinning a growth narrative arguably at odds with definitions in SEC filings and not borne out by reality.

And so the industry finds itself in a kind of guessing game, wondering whether the users – on whom the whole experiment would seem to hinge on – are actually showing up.