Deriving a venture capital strategy in crypto: the LP's perspective 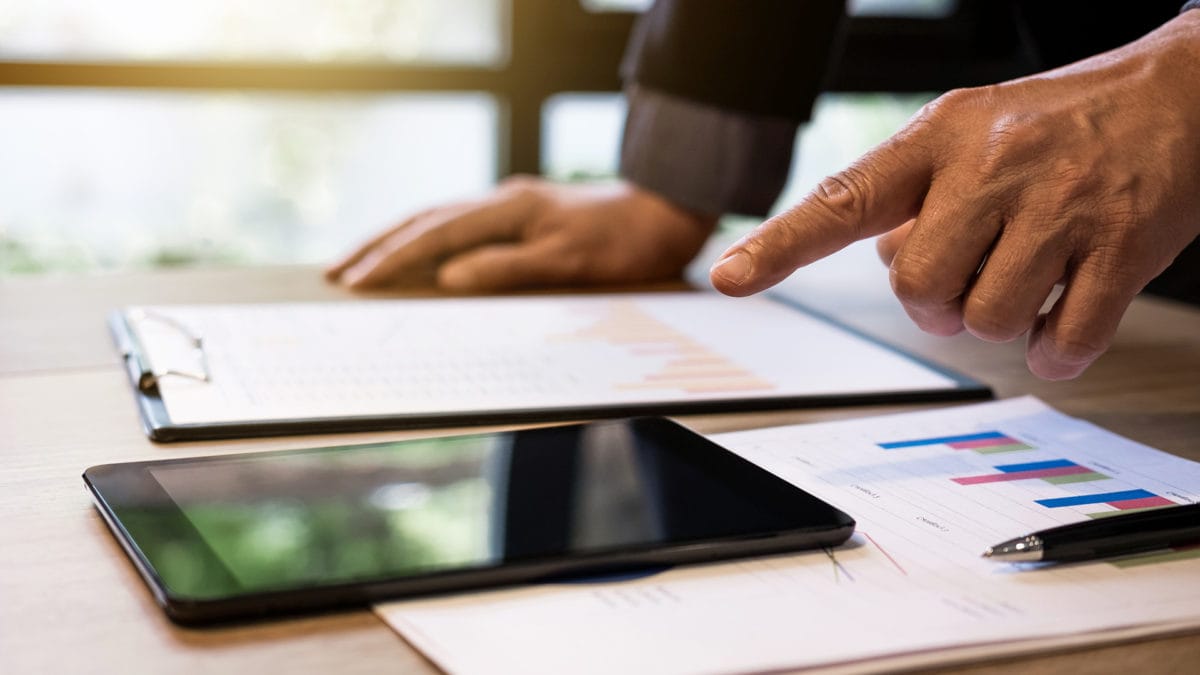 Ha Duong is a Principal at Cambrial Capital, a fund of funds specializing in the digital asset space. Previously, he was an Investment Manager at the Berlin-based venture capital firm Project A. Ha is a mentor at Techstars and connected across the European tech ecosystem.

Crypto is a nascent industry for which the base layer of software infrastructure is still being developed and refined. As it matures, it will potentially be integrated into existing digital value chains and enable completely novel applications. This process will take a decade or more.

Venture capitalists, who look beyond the swings of the price of bitcoin and other cryptocurrencies, appreciate this and are positioning themselves to make investments in the space that will deliver outsized returns for themselves and their limited partners (‘LPs’).

This technology is enabled by cryptoassets: digital tokens that have their own native attributes and market dynamics. Hence, VC investors need to take a different approach from traditional, equity-based, VC investing.

Deriving a VC strategy in crypto is hard. It requires VC fund managers to rethink from first principles the economics of venture capital. This piece touches upon a few key parameters for venture strategies and offers our perspective as professional investors in crypto funds.

The case for venture capital in crypto ?

Before diving into the topic, it’s worth asking: Why Venture?

Venture capital is about making long-term, fundamentals-based investments in early-stage businesses, where the chance of failure is high but the rewards of success can be outsized. Venture as an investment style does not mandate what instrument should be used to access such opportunities. Historically, venture capitalists have used equity (and, to some extent, convertibles).

But cryptonetworks are different, and they require us to think laterally about how to get exposure to the best entrepreneurs working on the most attractive opportunities in this dynamic ecosystem.

The next five to ten years represent a generational opportunity for venture-style investors to gain economic exposure to a subset of cryptonetworks that will become key pieces of global, public infrastructure; of owning a sliver of the next generation of web-based services.

We divide the opportunity set for Crypto VC Funds into two distinct groups:

The first is fundamentally new from an investment perspective: protocols have existed for as long as networks have; but until Bitcoin, they were not investible. Today, exposure to these can be obtained via tokens (ICO, secondary market, generalized mining), equity (where the company owns or has some sort of future claim over tokens), or SAFTs (convertibles for tokens upon network launch). Tomorrow, who knows; token economics is a rapidly evolving design space.

The second group looks and behaves like traditional venture investments. These are conventional companies, with expected cashflows that can be valued, and investors gain exposure via plain vanilla equity or convertible notes.

We pulled together some data on how these buckets have performed from sources including Crunchbase, TokenData, Dealroom, and PitchBook. Our findings indicate that both cryptoasset and ecosystem investments can be excellent opportunities with attractive returns. Here is a selection of the top-performing deals in both groups:

The data shows that great investments can be found across asset types and across geographies (with deals typically coming from Silicon Valley, New York, London, Berlin, Paris, Tel Aviv, and Singapore). As you would expect, the best (>20x) returns come from smaller and earlier stage financing rounds. The typical equity investment round for the best performing deals had a round size of $3–9m, highlighting the difficulty of finding ten-baggers that can absorb more than $10M of investment. Given that best practice is to take up half a round or less, crypto venture funds are expected to write checks smaller than $3–5M. Until the ecosystem matures, the vast majority of attractive deals will be early-stage. Funds should be sized appropriately.

This insight is taken from our analysis of our underlying dataset containing 2,743 investment rounds in crypto (you can request access to our dataset here). 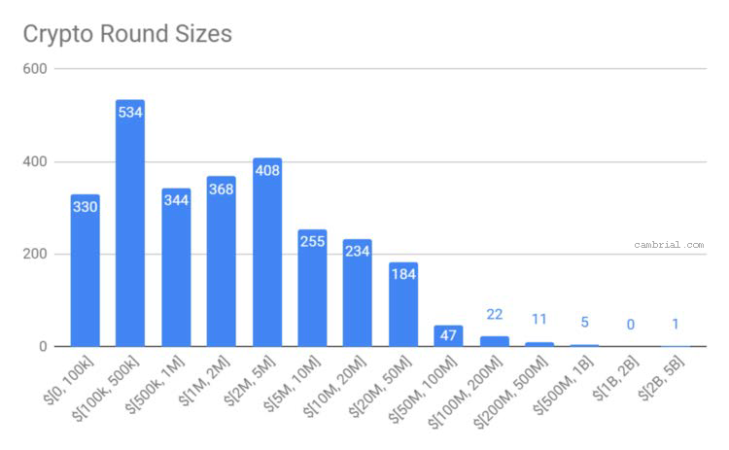 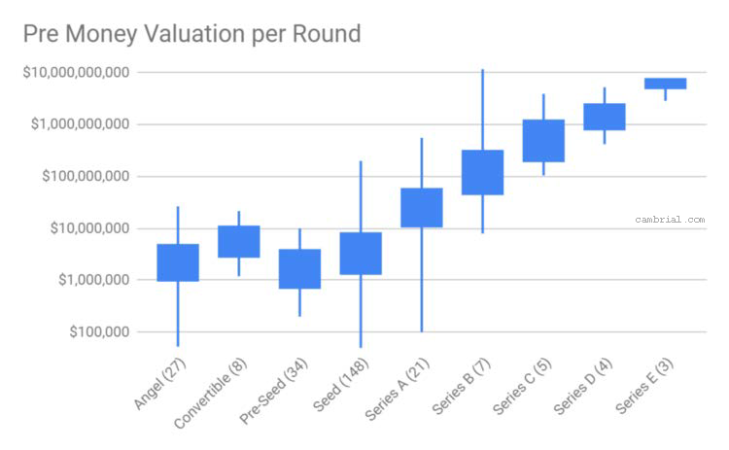 From the limited amount of data we have, we see a similar median exit value in comparison to traditional venture. However, the average exit value is higher, meaning outliers have an even more pronounced effect on the portfolio in crypto. We will follow up on this article with another post on crypto fund portfolio construction, where we will dive deeper into the topic.

On top of figuring out the investment strategy of a fund, there are many more crypto-specific challenges awaiting fund managers. Starting a new fund requires so much more than just a strategy. For instance, one also needs to think about the right structure and implications on tax, reporting, regulations, and fundraising.

When it comes to fund formation, conventional venture capital structures often fail. Traditional large US-based VC companies are usually regulated as Exempt Reporting Advisors (ERAs) under the Venture Capital Fund Advisors Exemption (Rule 203(l)-1) of the Investment Advisers Act of 1940. This frees them from regulatory, disclosure, and administrative overhead as long as they limit their fundraising to wealthy individuals and institutions. On the flip side, this only allows them to invest up to 20% of the fund in non-qualifying investments including cryptoassets. Earlier this year, Andreessen Horowitz announced their restructuring into a Registered Investment Adviser (RIAs) to avoid that 20% limit and to give them higher flexibility to invest. But it also comes with additional regulatory oversight and roughly 8x higher annual compliance costs.

Smaller fund managers with less than $150m in aggregate AUM can operate under the Private Fund Adviser Exemption (Rule 203(m)-1) whereas foreign fund managers with less than $25m in AUM in the US can act under the Foreign Fund Manager Exemption (Section 202(a)(30)) to avoid restrictions and higher costs. Still, it is very difficult to navigate the complex regulatory and reporting landscape which is why many fund managers have started to look into alternative jurisdictions and regulatory regimes to find the right fit. 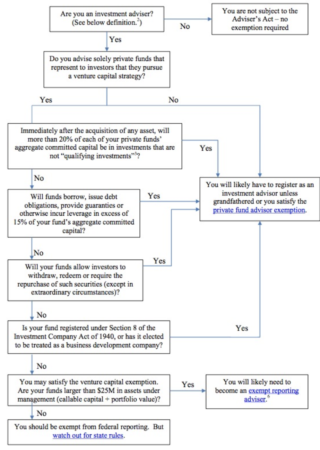 The decision about the right fund structure will depend on individual circumstances including domicile, LP base, and investment strategy.

There has recently been a shift towards launching more traditional VC-type funds (closed-ended, 10y lockup, capital calls, etc), but most of the early crypto funds that were started 2 years ago or earlier chose hedge fund structures to bypass investments limitations. They operated mostly as 3(c)(1) Funds or 3(c)(7) Funds under Rule 506(b) of Regulation D under Section 4(a)(2) of the 1940 Act and did venture capital-type investments out of their HF structures via side pocket. While it worked at first, they eventually realized the challenges of that (e.g. liquidity management, valuation policy, high water mark, J-Curve, alignment, etc).

For managers looking to make long-term fundamental investments in early-stage technology, we believe a closed-ended VC structure is a better fit. These are better aligned from a fee perspective, remove portfolio and liquidity management complexities, and reduce the pressure on the manager to deploy capital quickly. The cost, of course, is worse liquidity for the LP.

There is plenty of nuance to the question. If there is a sound reason for something to be done differently, LPs should keep an open mind.

However, manager be warned — when LPs are already wary of an innovative new investment vertical, the last thing you want to do is to choose an unconventional investment structure at the same time.

Cryptoassets and the challenge of earlier liquidity ?

The hedge fund structure adopted by many early crypto managers provided flexibility. It introduced the possibility for active portfolio management — an important consideration given the earlier liquidity of cryptoassets relative to the average 6–9 years to exit in traditional venture.

Cryptoassets are the native currency of the economic microsystem that runs on top of cryptonetworks and hence, they’re necessary for their full functioning. This means as soon as networks go live, their native cryptoassets become tradeable. Since the asset is priced before the network realizes its full potential, its price can experience extreme volatility as market participants constantly reevaluate the probability of the project’s success.

Marking any early-stage venture portfolio to market each month is likely a health hazard to both managers and their LPs. In the traditional venture world, this is not possible, but in crypto, network assets typically need to be liquid from inception. In other words, as our friends at Multicoin so eloquently put it, crypto investing — uniquely — offers venture capital economics with public market liquidity.

For a VC strategy, earlier liquidity raises important questions in two main areas: fund lifetime and portfolio management. Given the faster time to liquidity of cryptoassets, venture managers (or their investors) may reasonably reconsider whether a ten year fund lifetime is really necessary, or whether they should take advantage of the underlying assets’ liquidity in order to offer shorter fund lifetimes or seven or even five years instead of the traditional ten.

The debate here has echoes of the late-stage traditional venture funds, which may hold onto assets for years after IPO. We believe the traditional ten year fund lifetime makes sense as that is the comfortable time horizon for cryptonetworks to mature and realize their potential (just think about where Bitcoin is after 10 years).

Additionally, it’s important for investors to be aligned with the projects as a long term investor.

Given fund investment periods may last up to four years, having an additional six allows the manager to continue making investments in early-stage projects and companies, enabling them to widen their vintage — an important determinant of return in venture. In addition, the typical ten years are still needed for the (traditional) Ecosystem / Picks and Shovels / Infrastructure type investments. This does not prevent managers from returning capital to investors early when they exit a position in the initial years. What they choose to do with recycled capital is critical, and leads us neatly to our next consideration.

How should VCs think about active portfolio management?

First, you have to question whether cryptoassets really are liquid once they become tradeable. The fact that an asset is listed on a crypto exchange doesn’t mean it’s liquid enough (high volumes, tight spreads, deep order books) for you to exit your position without materially moving the price. But in cases where there is liquidity, should VCs rebalance their portfolio regularly? Should they sell positions in non-performing networks in order to focus on the winners? How should they think about Reserves and Recycling?

There is no single answer to these questions as they also come with tax, regulatory and reporting implications. We keep an open mind. A venture manager’s ability to recover capital from failures and to double down on the winners has been a source of edge and we’ll expand on this topic in another content piece.

The changing nature of venture investing in crypto ?‍?

The potential need to rebalance the cryptoasset portfolio more regularly vs simply waiting ~7 years until an M&A transaction or IPO in traditional venture (sometimes with the usage of Secondaries on buy or sell side in between) is not the only way venture investing in crypto is different. Over the next decades, the role of the investor could be reimagined the same way the nature of investments could change (e.g. DeFi).

In a previous post, we have already shared our LP perspective on Generalized Mining or Active Network Participation. We highly recommend revisiting it should you be interested in providing value as a long term investor and early supporter of a cryptonetwork.

Besides contributing to bootstrapping a network’s supply side, there are many more ways a venture investor can add value to crypto teams, including:

We’ve seen the crypto space evolving drastically within the last 24 months and we expect this pace of change to continue going forward.

Thanks to David, Edward, and Alex for contributing to this post.