This is a new token sale lawsuit. It’s not a class action. Instead, it’s filed on an individual basis by Craig Clemens against Uledger and people involved in the sale and marketing of "ULD" tokens.

The Complaint says this sale raised $30 million between “late 2017” and “late 2018.” The lawsuit has 9 counts — 1 is for allegedly violating the Securities Act of 1933 by failing to register with the SEC and the others are state law claims, breach of contract and a variety of common law tort claims, along with a corporate veil peircing theory (styled as “alter ego liability”) in count 8.

Per the Complaint, “ULEDGER is a start-up technology company that purports to have succeeded in ‘leveraging blockchain’s capability to create an immutable history of data’ to give its customers ‘a secure, private, tamper-proof, mathematically verifiable record of the content of their data at a point in time.’’ By doing so, ULEDGER claims to provide its clients’ data ‘greater integrity and makes it easily verifiable in the event of audit, legal challenge, or regulatory inquiry.’” (So basically, Uledger is a blockchain company that uses blockchain to create secure data?)

Anyway, they raised $30 million, allegedly, and Plaintiff says he bought $300,000 of tokens, but that the sale was based on “many misrepresentations, factual omissions, and unlawful action”, that he will never see a return on his investment and that the Defendants enriched themselves at the expense of investors.

Oh, about the defendants — it’s not just Uledger, which plaintiff says was just a device to enrich individuals. So the complaint names the management team, including Taulant Ramabaja, Pete Anewalt and Josh McGiver. Also, it names Lorien Newman, who is described as a “Security Token Advisor” (remember those?) based in Israel.

One of the useful things about a corporation is that provides protection from individual liability — if it is set up correctly. In cases like this one, involving an alleged investment gone bad, it’s pretty typical for a plaintiff to sue individuals involved in the scheme and to try to show that the corporation was just a sham. That is part of what is going on here and why there is an entire count of the complaint devoted to “alter ego liability.”

What does this mean and why does it matter? If the Complaint only succeeds on a claim against the corporation alone, if and to the extent the veil pierced the individual defendants will be held jointly and severally liable. It also means that (assuming the claim stands) plaintiff will be able to do discovery related to corporate structure or lack thereof, as the case may be, and (potentially) some aggressive asset tracing discovery from the individual defendants before actually getting a judgment.

We’ve covered lots of token sale litigation in CCM and this one looks like many others that we’ve seen, with the interesting twist that the “security token advisor” was also added as a party. It also (again) shows how everything you say electronically can end up as an exhibit in a Complaint, including this excerpt where one of the defendants promises the sun, moon and stars: 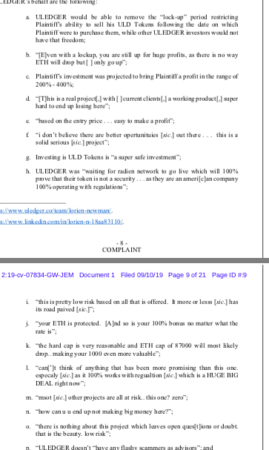 Because this case is not a class action, btw, it can be expected to proceed a little bit more quickly.  The next step will be answers or possibly motions to dismiss.  I'd expect that the security token advisor in particular will be eager to argue that he's not subject to jurisdiction in the U.S. and not part of the group of people who can be subject to U.S. securities laws.  We'll report back on developments of interest in this case as we see 'em.

Disclaimer: Crypto Caselaw Minute is provided for educational purposes only by Nelson Rosario and Stephen Palley. These summaries are not legal advice. They are our opinions only, aren’t authorized by any past, present or future client or employer. Also we might change our minds. We contain multitudes.