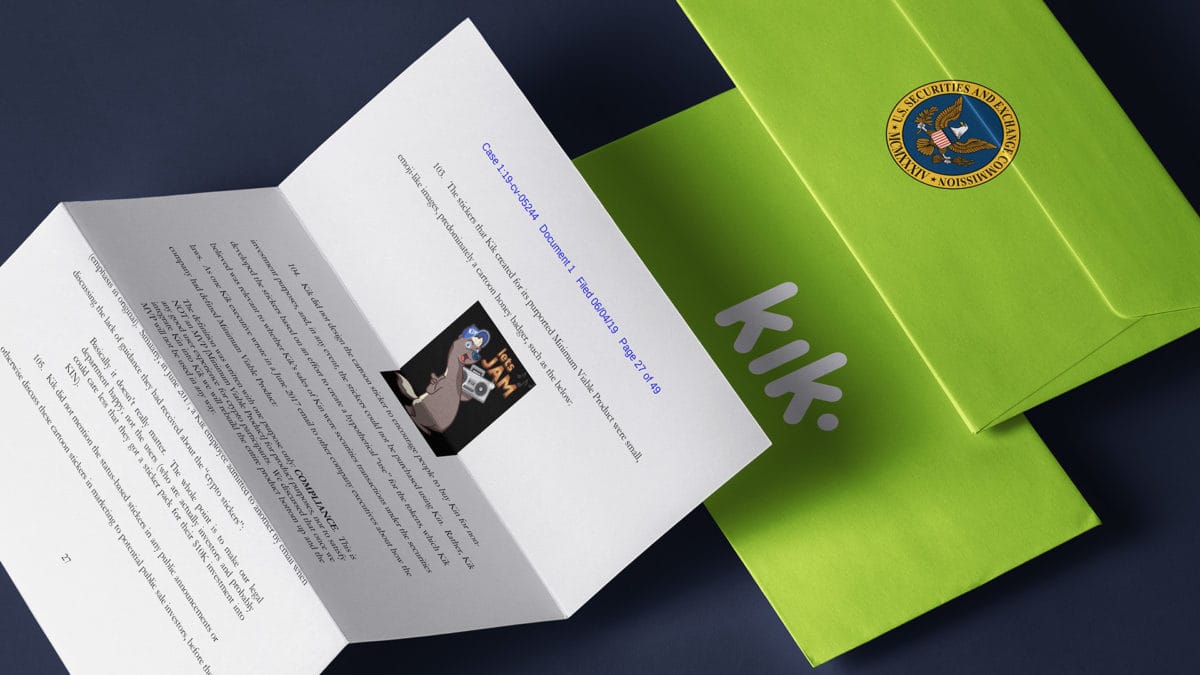 As anyone who follows crypto related legal developments knows by now, the SEC sued Kik Interactive, Inc. in New York Federal Court on June 4. At issue is a 2017 token sale in which Kik sold one KABAJILLION “Kin” tokens (OK, only a trillion, but a kabajillion sounded better, amirite?)

In one corner, Kik says the tokens are currency used within its application and controlled by an independent foundation and that the SEC is engaging in regulatory overreach that is damaging to innovation and outside the scope of its statutory authority.

In the other corner, The SEC says that the tokens were part of an unregistered securities offering by a software company with lousy revenue and which saw an ICO as a “Hail Mary” tactic to save it from going the way of all flesh. In a press release announcing the lawsuit, it also says that “Companies do not face a binary choice between innovation and compliance with the federal securities laws.”

And in a competing press release Kik says that they knew this was going to happen and they are itching for a fight and to make the world safe for blockchain.

The SEC lawsuit is a meaty 49-page pleading, full of quotes from Kik’s internal emails, social media posts and presentations, a number of which were preserved for posterity on YouTube. It’s a good read, if you’re into this sort of thing, and you get the feeling that the SEC lawyers who wrote it enjoyed themselves. One of my personal favorite quotes is from a June 2017 email in which a Kik employee wrote to another discussing cartoon stickers that Kik had designed: “The whole point is to make our legal department happy, not the users (who are actually investors and probably could care less that they got a sticker pack for their $10K investment into KIN).” (There’s also a “start up, cash in, sell out, bro down” feel to some of it, though that certainly doesn’t mean any violated any laws).

If you’re a litigator you know from experience that clients say regrettable things via email and that these regrettable things often show up in court filings. One of the many interesting things about this case is that the lawsuit was filed after a formal SEC investigation that involved document subpoenas and witness interviews. This isn’t the way ordinary litigation happens — usually you don’t know what is in the other side’s files until after the lawsuit has been filed and discovery has been done. Here, the SEC has already seen the other side’s files and liberally threaded contents from it through this lawsuit.

I am going to resist the temptation to provide an exegesis of the suit with any more of my favorite quotes because, well, there are honestly too many and the fact of the matter is that well-drafted lawsuits generally always sound bad. If you want to read the thing (it’s a great read) you can find a copy of it here. I will also direct you to my initial tweetstorm about the case, which includes a “best of” section, and which you can find here.

I also can’t tell you for sure who is going to win. On the one hand, it does look really bad for Kik on a first pass. The pleading is a parade of horribles in which Kik personnel used language referring to Kin as an investment opportunity multiple times. Some of these statements are by people whose statements can probably be imputed to the company and thus considered “party opponent” statements for purposes of the federal rules of evidence. This means that the statements aren’t hearsay and can be used as substantive proof and treated as admissions. On the other hand, Kik has solid defense lawyers who wrote an impressive and persuasive (well, not as far as the SEC was concerned) Wells submission. They will argue that the SEC has stitched together an irrelevant narrative of cherry-picked facts and statements that do not overcome the fact that the tokens were and are currency with a legitimate use in the KIK ecosystem. They will also surely argue the fact that Kik looking for new revenue sources is hardly a sign of any sort of bad intent. If creating a new product violates the Securities Act it’s time to say goodbye to innovation and capitalism. You get the idea. They will also pound on the law, hard. I can hear the argument and, depending on the judge you draw and the quality of the litigators, it’s not laughable. They may also have some good arguments for motion practice that we haven’t seen yet. So … it looks bad, but it’s a mistake to conclude that this is a sure loser. If I were handicapping it I’d give Kik at best a 15 to 20 percent shot of winning on the merits. My prediction is that, whatever these folks have said publicly, there is still a solid chance that thing ultimately settles. Most cases do.

What else is notable? Whelp, this is the first ICO case in which the SEC has pursued an issuer in federal court for failing to register. The other registration cases have all settled and other litigated SEC token sale cases have involved securities fraud allegations. Does this signal anything about the SEC’s approach to token sales? Hard to say. It appears that this case was under investigation for a year and a half and that there was an attempt to settle that failed. Kik felt that the settlement structure that the SEC proposed was too unattractive to move forward with, so said “fine, sue us.” The SEC obliged. I don’t actually think it’s at all notable that the SEC decided to sue someone who they thought violated the Securities Act in a massive token sale to many U.S. investors. It just signals what most sane defense lawyers will tell you — if you don’t settle with the SEC, there’s a good chance they will come after you.

I’ll also point out that we are nowhere near the end of the statute of limitations for the SEC to file these sorts of lawsuits. It’s generally going to be about five years. So look for more to come in the next three years or so. Also, if time is running short and the SEC is negotiating with you they may well ask for a tolling agreement (a thing that stops a statute of limitations from running, by agreement). So these cases have no chance of trailing off any time soon.

There were a lot of excellent comments on the tweeter by lawyers who practice in the space. I quite liked Jason Gottlieb’s takes, which you can find here. The comments from other lawyers in the responses are excellent too.

Anyway, there will surely be more to follow in this case and when that happens we’ll cover it here.