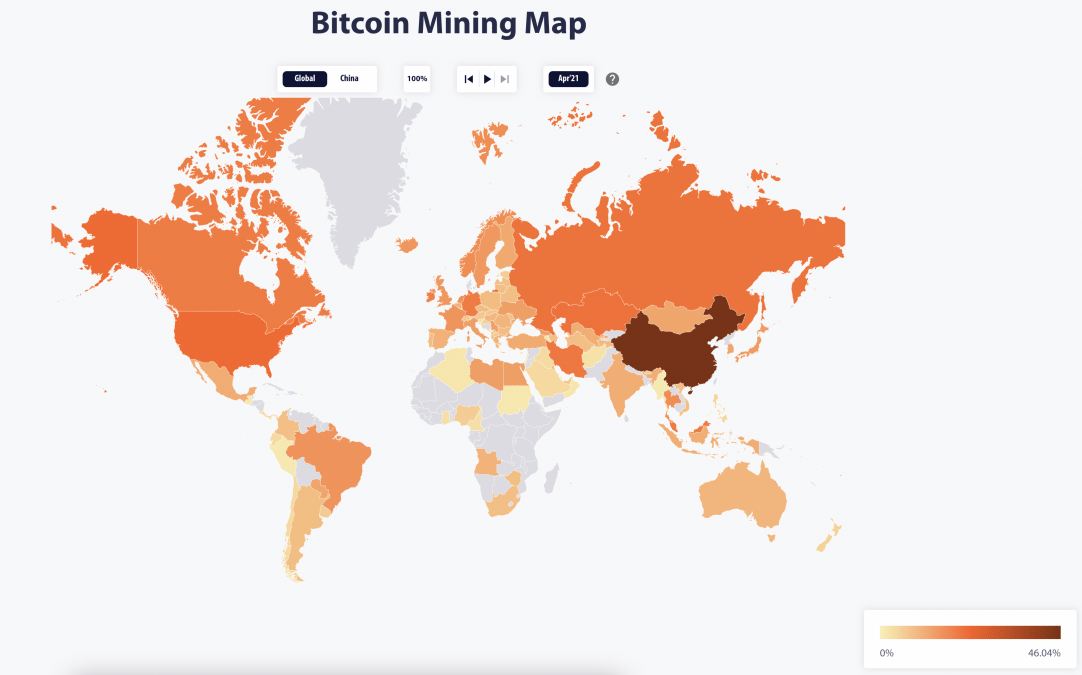 The findings corroborate the Block's report in April that China's dominance was fading amid the rising profile of institutional investors in North America.

The CCAF first rolled out the mining map in May 2020 with data available from September 2019 to April 2020 but, until today, it had not made any update to the dataset over the past year.

As of April 2020, the bitcoin mining map's data came from three Chinese bitcoin mining pools with international client bases — BTC.com, ViaBTC and Poolin — which collectively made up about 30% of bitcoin's total hash rate. As of then, CCAF's data sample estimated China's hash rate dominance to be 65%, showing it had already declined from 75% in September 2019.

By April 2021, however, the CCAF estimated China's hash rate percentage to be even less than half, at 46%. Although the percentage could be relatively skewed due to the inclusion of data from a predominantly U.S.-focused mining pool.

While the renewed dataset draws information from the existing three Chinese mining pools over the past 14 months, it added data from the Foundry USA pool for the timeframe between February and April this year, according to CCAF's methodology.

The mining map, however, has not included data for May and June, a critical period that witnessed the significant plunge of bitcoin's hash rate due to China's crackdown on local bitcoin mining farms.

On-chain data shows that bitcoin's hash rate had dropped by more than 50% from its peak of 180 EH/s at mid-May to just below 90 EH/s at the end of June.

The Chinese government revealed its crackdown effort on May 21 and the follow-up measures materialized in early June. This suggests China's bitcoin hash rate dominance prior to the crackdown could have been between 50% to 60%.

With the decline of the hash rate in China, the CCAF's mining map also shows the growth of overseas regions, with the U.S. taking the second largest percentage of the global hash rate. It now had a 16% share as of April, up from 7% a year ago.

Other regions like Russia, Kazahkstan and Iran also saw steady growth over the past year.