Musk said in a tweet early Wednesday UTC time that "You can now buy a Tesla with Bitcoin."

"Tesla is using only internal & open source software & operates Bitcoin nodes directly," Musk added in a following reply. "Bitcoin paid to Tesla will be retained as Bitcoin, not converted to fiat currency."

His tweets came shortly after some Twitter users started to notice the support for bitcoin as payment option in Tesla's U.S. stores for all models of its electronic cars.

Musk said the bitcoin payment will be available for its U.S. store at this stage. "Pay by Bitcoin capability available outside US later this year," he said.

Indeed, The Block has verified Tesla's official U.S. pages and is able to see the bitcoin payment support in its U.S. store.

Based on the bitcoin payment details that The Block has seen, it appears Tesla generates different bitcoin addresses each time for different buyer orders.

Tesla also told users it currently does not accept payment in digital assets other than bitcoin and would require potential buyers to send the exact bitcoin for their orders in one single transaction.

The support for bitcoin as a payment method is not surprising as the electronic car maker said in its February filing that it was planning to accept bitcoin.

Tesla also made headlines last month with its announcement that it made a $1.5 billion investment in bitcoin in January as part of its treasury management policy. 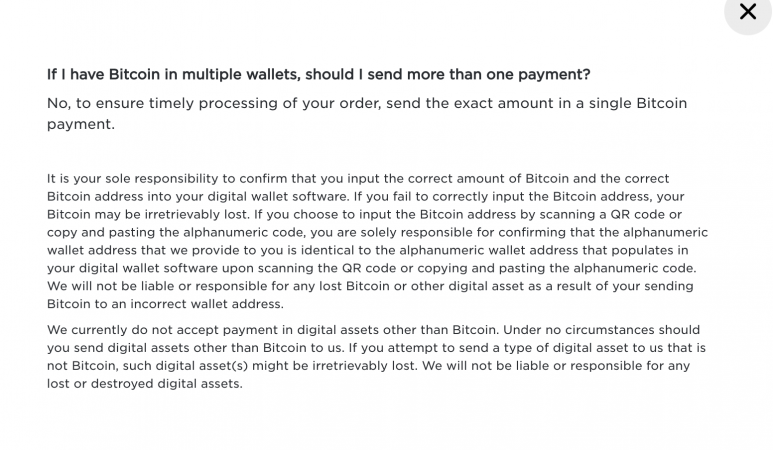