A couple of months later, Coinbase has continued to climb in those rankings, reaching the 30th slot out of 100 as of Thursday, according to the store's live rankings. 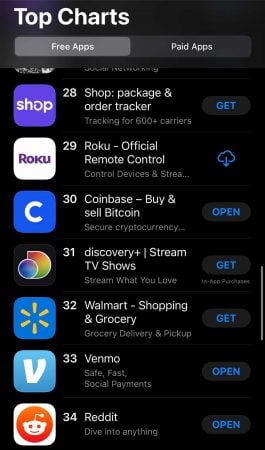 The app's progression in that ranking can be seen in the App Annie chart below (the data is updated as of January 6:

The app's rising popularity comes despite connectivity issues for Coinbase's platform. As of press time, Coinbase's status page shows "degraded performance" for its website, API, mobile service and ID verification system. As previously reported, tech problems have dogged Coinbase as activity in the crypto market ramped up near the end of last year.