Several months ago, MicroStrategy made waves when it first disclosed that it was buying bitcoin as a hedge against inflation — and in the time since, the company has only expanded its holdings and plans around the cryptocurrency.

And Renaissance Technologies — a hedge fund famous for its sterling market performance and quantitative approach to developing trading models — appears to have been major buyer of MicroStrategy's stock this year.

As noted by The Block Research analyst Ryan Todd:

Interestingly, they upped their position size by +4x in June, assuming in response to MicroStrategy CFO remarks on June 28th earnings call that the firm may allocate treasury into bitcoin...

Notably, RenTech gave the nod for its flagship Medallion fund to begin starting CME bitcoin futures in March. And while it's not clear whether the Medallion fund has begun to deploy capital in that direction, its investments in MicroStrategy signal an interest — however indirect — in what might be termed as "bitcoin plays."

Market data indicates that RenTech made MicroStrategy stock buys in June and September, pushing its holdings to 1.96% of all outstanding shares. The total value of those shares is more than $40 million at a share price of $285 apiece. MicroStrategy first indicated its interest in bitcoin publicly during an earnings call in late July. 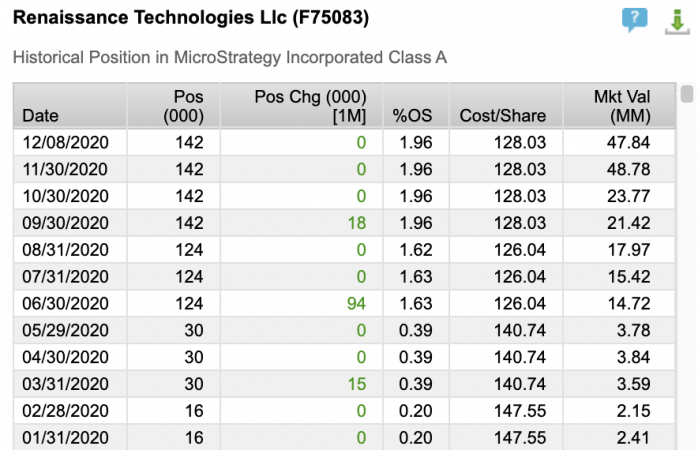