Samsung has integrated Elrond (ERD) token on its blockchain wallet.

Revealing the news exclusively to The Block on Thursday, Elrond said Samsung has added support for the ERD token into its blockchain ecosystem in a “mutually beneficial” partnership.

Samsung users will get easy access to the token and decentralized applications (dApps) built on the Elrond network, while Elrond will get direct exposure to Samsung’s global customer base to reach out to masses, said Elrond. One ERD token is currently worth $0.001774. 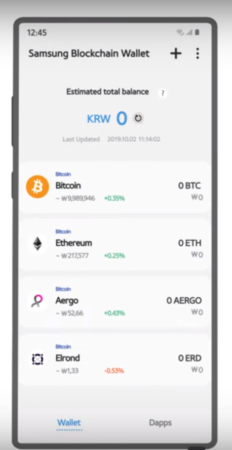 Elrond did not provide details on which dApp will be first released but said it will be a consumer app and be announced and offered via the Samsung app store.

Elrond claims to focus on performance and usability for its blockchain network and said that it is “ready to go live with a Layer 1 solution which brings a 1,000-fold improvement over existing blockchains.”

Samsung blockchain wallet currently also supports bitcoin (BTC), ether (ETH) and Aergo token, among others. Earlier this week, Samsung also added support for TRON to enable developers to build applications on the TRON blockchain and to provide customers access to these applications via its blockchain-enabled smartphones.