Hari Sevugan has joined the team of developers behind decentralized exchange developer Uniswap Labs as head of communications. The Washington insider made his name as the senior spokesperson for President Barack Obama's 2008 campaign. He also worked as the deputy campaign manager for current transportation secretary Pete Buttigieg's 2020 presidential campaign and as the national press secretary for the Democratic National Committee.

A source close to the matter confirmed Sevugan will manage media affairs. The news was first reported by CoinDesk, with Sevugan telling the outlet he's looking forward to making crypto and policy decisions digestible to everyone.

Sevugan's appointment comes at a time of scrutiny for Uniswap Labs. The Securities and Exchange Commission (SEC) is said to be investigating the exchange developer, as reported by the Wall Street Journal. Enforcement attorneys are looking into on how the platform is marketed towards investors and requesting other information from the team.

No formal allegations of wrongdoing have surfaced at this stage, but some are concerned that the investigation could signal a new era of enforcement against decentralized finance (DeFi). Uniswap V3 continues to be the leading player in the DeFi exchange space, with the lion's share of DEX volume.

News of the investigation came after SEC chairman Gary Gensler said his agency had the authority to regulate DeFi projects that reward participants with tokens, regardless of how "decentralized" the projects claim to be. Uniswap's UNI token was up today, trading at about $26 at time of publication. 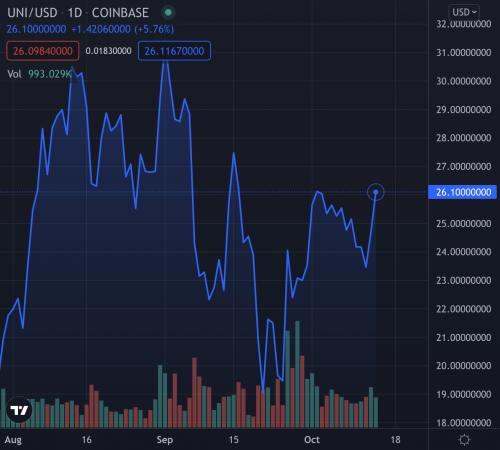