Bitcoin.org site appears to be hacked and is promoting bitcoin giveaways

Bitcoin.org, the oldest bitcoin education resource site registered in 2008, appears to have been compromised and is currently promoting dubious bitcoin giveaways.

Users first started to notice and share on Twitter early Thursday morning that the homepage of Bitcoin.org is now displaying a pop-up page that asks users to send bitcoin to a dedicated address with promises they will receive a doubled amount in return (which they obviously won't).

Such method is similar to typical crypto giveaway scams that were rampant on Twitter and usually initiated by imposters of influential accounts, including those of Vitalik Buterin and Elon Musk. 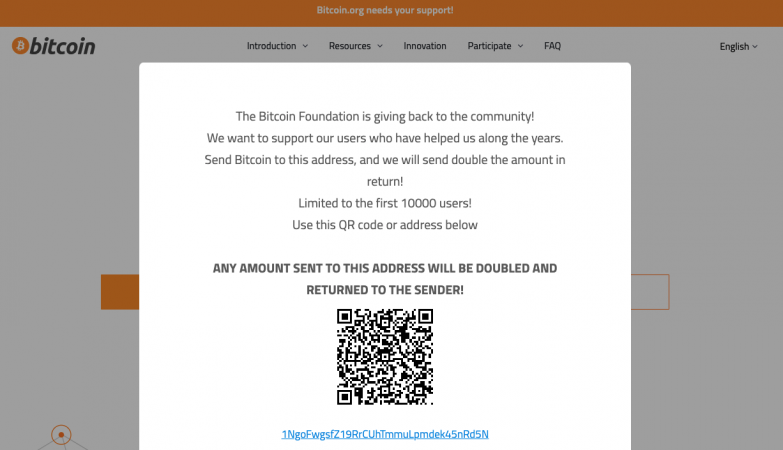 Meanwhile, all other sub-pages on Bitcoin.org are not functional as the current homepage does not allow the user to click through to any other pages, such as the PDF version of the Bitcoin white paper.

The direct URL for the Bitcoin white paper on Bitcoin.org also shows a "404 Not Found."

In a Twitter reply to Bitcoin Core contributor Matt Corallo, domain hosting site Namecheap said it has temporarily disabled the Bitcoin.org domain, which is now inaccessible.

The address that's displayed on the site right now has received 0.4 bitcoin worth $17,000 over the past hour but it's unclear if it's from any victim that fell for it.