Bullish, the cryptocurrency exchange backed by Block.one, revealed Friday its plans to go public via a SPAC deal, making it the latest company in the digital asset market to announce its intentions to list its shares on an equity exchange.

As part of the deal, Bullish will merge with Far Peak Acquisition Corp (NYSE: FPAC), a SPAC company that has been led by former New York Stock Exchange president Tom Farley. Farley will take the reins as Bullish's new chief executive. The deal values the firm at a whopping $9 billion, according to a press announcement.

Proceeds from the capital raise include $300 million of committed private investment in public equity from EFM Asset Management as well as BlackRock and Galaxy Digital.

The transaction, which is expected to close by the end of 2021, will bring to market the latest public company in the digital asset market, joining Coinbase and Bakkt, the latter of which also announced its own SPAC deal.

At $9 billion, Bullish's valuation would represent one-fourth of Coinbase's $45 billion valuation. Coinbase is the largest cryptocurrency exchange in the US with over 56 million verified users. Bullish has only just released an invite-only pilot, according to a deck. The company was launched in May.

The firm is hoping to woo customers with a hybrid style order book that borrows from both the structures of decentralized finance platforms and centralized ones, according to an investor pitch deck. 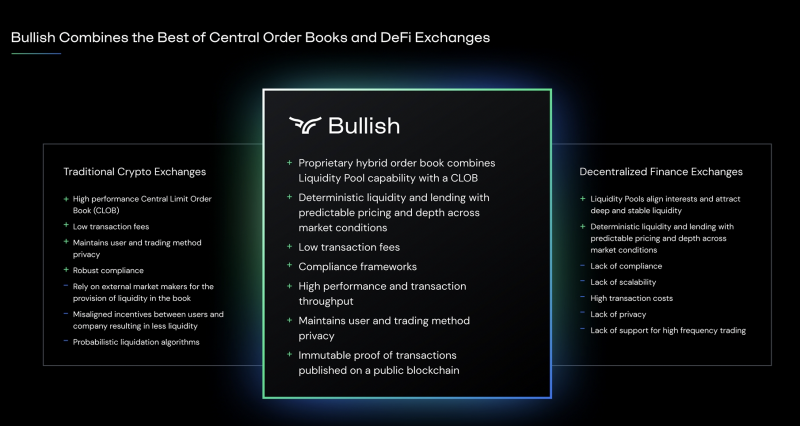 "Bullish is well positioned to strategically deliver value to its prospective shareholders as it capitalizes on market trends and places technological innovation at the core of its identity," Farley said. "We’re only in the first or second inning of the cryptocurrency market and I’m thrilled to be joining the Bullish team as we revolutionize the future of digital assets through cutting edge financial technologies."