Government officials of Sichuan's energy regulators are hosting a seminar next week to gauge the impact that shutting down local bitcoin mining activities will have on the hydro-electricity excess this year.

The Sichuan energy regulatory office under China's National Energy Administration sent a meeting summon on May 25 to representatives in various state-owned energy entities such as the State Grid's Sichuan office, the Sichuan Energy Industry Investment Group and the Energy Trading Center.

Based on the seminar summon seen and verified by The Block, the meeting is set to happen on June 2 in Chengdu, the capital city of Sichuan province, as per the request of the National Energy Administration.

The meeting request came just four days after China's State Council iterated a comment about cracking down bitcoin mining and trading activities. But different from a direct shut-down proposal that the Inner Mongolia government is taking, the Sichuan government aims to understand the impact before making a decision.

Sichuan is known for being a major bitcoin mining hub due to its abundant water resources during the summer, which generate cheap and excessive hydro-electricity every year. One of the local government's long-time priorities is to attract enough businesses to consume such excess energy, which would otherwise go wasted.

Based on the meeting agenda outlined in the note, representatives from major energy sectors in Sichuan are being asked to present the size of the crypto mining activities under their remit. In addition, they are being asked how much impact shutting these miners down will have on the government's plan to consume excess energy this year.

As The Block reported previously, the Sichuan government set up so-called "Hydro-electricity Consumption Industrial Demonstration Zones," which welcome energy-intense industries, including bitcoin mining farms, to help consume energy excess during the summer in a compliant way. 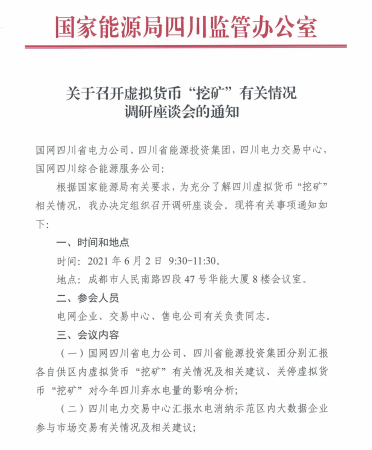