Crypto mining pool F2Pool has coded a headline from The New York Times into the first bitcoin block it mined after Coinbase's landmark direct listing on Tuesday.

F2Pool mined the block height 679,187 shortly after Coinbase's Nasdaq listing on 13:30 UTC time and rooted a March 10 headline in the coinbase transaction from The New York Times on the U.S. government's trillion dollar stimulus plan in its latest attempt to boost the economy.

The text of the message, which will stay in the bitcoin blockchain forever, follows the fish emoji of F2Pool and reads: "NYTimes 10/Mar/21 House Gives Final Approval to Biden's $1.9T Pandemic Relief Bill."

While the move is to remark Coinbase's direct listing on Nasdaq as the world's first crypto exchange stock, the message that F2Pool chose also resonates with what bitcoin creator Satoshi Nakamoto marked down in the network's genesis block with a similar format and ideology: "The Times 03/Jan/2009 Chancellor on brink of second bailout for banks."

It also follows the same effort by F2Pool in the last block before the bitcoin halving last year, where it coded an April 9 headline again from the New York Times: "With $2.3T Injection, Fed’s Plan Far Exceeds 2008 Rescue."

"The global pandemic is spreading, and printing money is widely used as an attempt to stimulate the economy to ease the pressure of the crisis, but an increase in the money supply also leads to an increase in inflation," the firm said in a statement shared with The Block, adding: 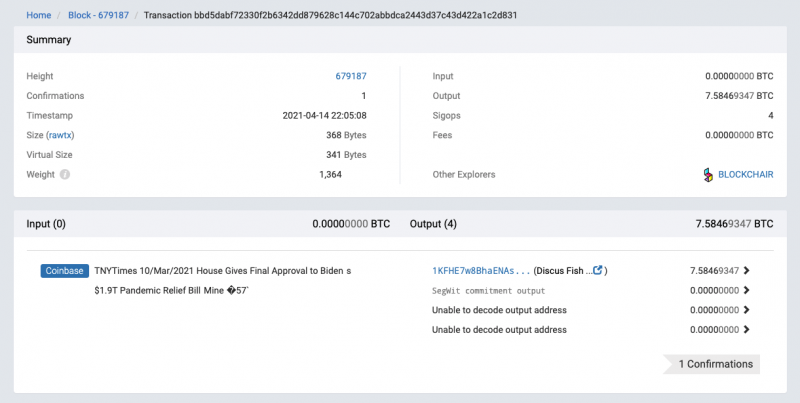