Bitcoin's volatility has long been considered one of the biggest impediments of its adoption among Wall Street's heavyweight investors.

Research from JPMorgan, however, indicates that bitcoin's dramatic price swings are "subsiding," opening the door to greater interest from institutional investors.

"Over the past weeks, we started seeing the first signs of bitcoin volatility peaking and subsiding from its end-February highs," analysts led by Nikolaos Panigirtzoglous noted.

According to the bank, bitcoin's realized six-month volatility has stabilized around 72% — down from highs above 100% during the 2017 market boom. 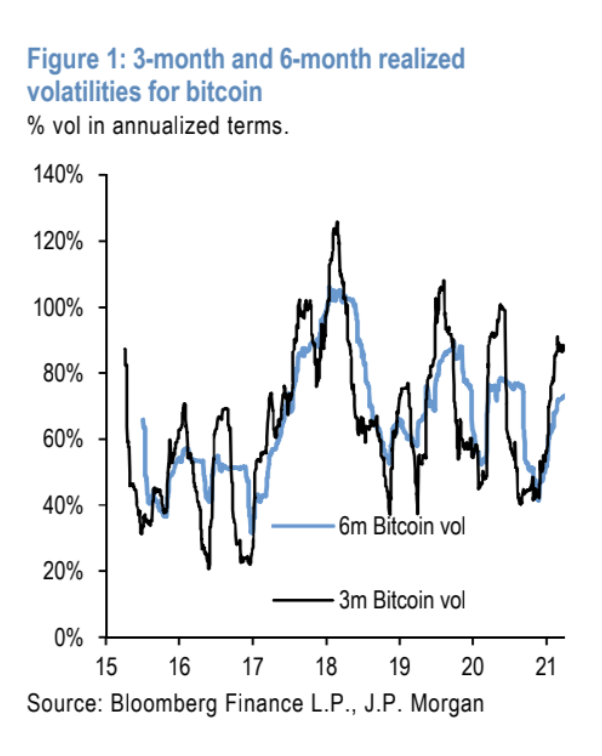 "These tentative signs of bitcoin volatility normalization are encouraging," the analysts said.

They added: "In our opinion, a potential normalization of bitcoin volatility from here would likely help reinvigorate the institutional interest going forward which, as we had highlighted in our previous publications, slowed in Q1 vs the previous quarter."

Despite signals that Wall Street is warming to bitcoin, such as moves by Goldman Sachs and Morgan Stanley to open the market up to its high-net-worth clients, flows in bitcoin-linked funds have slowed.

Still, the bank said that bitcoin's volatility in and of itself is not as important as its volatility relative to bullion. As a competitive store of value, the bank said bitcoin "will become over time a more important component of investors' universe and given their preference for 'digital gold' over traditional gold."

"This long-term upside potential is conditional on the volatility of bitcoin converging to that of gold," the bank added.